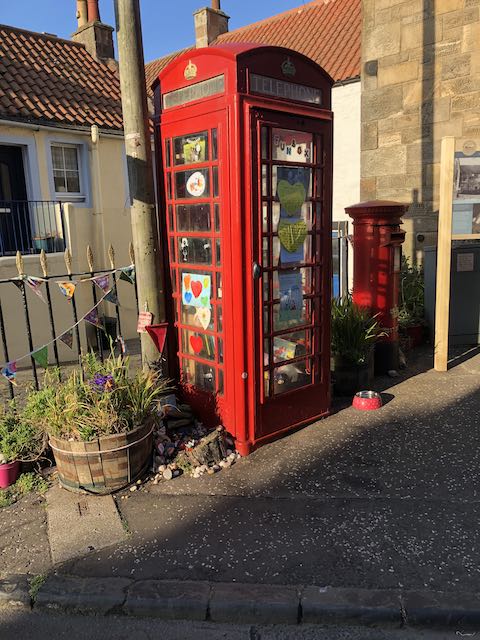 Alexander Graham Bell, born in Scotland, was granted a patent, number 174,465 for the first telephone on March 7, 1876, by the US Patent Office. Bell, on March 10 1876, used “the instrument” in Boston to call Thomas Watson who was in another room but out of earshot. He said, “Mr. Watson, come here – I want to see you” and Watson soon appeared at his side. The rest is history!

The K6 pillar box red British telephone box was first introduced in the UK in 1936 to commemorate the Silver Jubilee of King George V. They were designed by renowned architect Sir Giles Gilbert Scott. A K6 British Telecom’s telephone box was placed on the corner of James and John St in Cellardyke and at Cellardyke Harbour in the mid 20th Century. They were continued to be used until early in 2020 when they were decommissioned because of lack of use and the ones on John St and at the Harbour were sold to the Cellardyke Trust.

From 1926 onwards, the fascias of telephone boxes were emblazoned with a prominent crown, representing the British government in all parts of the UK and the British Empire. The design was initially the ‘Tudor Crown’, then in widespread use in government service. In 1953 the new Queen, Elizabeth II, decided to replace the Tudor Crown in all contexts with a representation of the actual crown generally used for British coronations, the St Edward Crown. This new symbol therefore began to appear on the fascia’s of K6 kiosks. The St Edwards Crown was initially used in all parts of the United Kingdom. However, from 1955 in Scotland, a representation of the Crown of Scotland started to be used. The paint colour used most widely today is known as “currant red” and is defined by a British Standard, BS381C-Red539.

The phone box on John St has the Tudor Crown on it dating it from 1926 – 1953. The one at Cellardyke harbour has the Crown of Scotland on it which dates it to after 1955. The actual dates that these boxes were installed has been impossible to find. Please let us know if anyone in the community can offer information or photographs.

The Cellardyke Trust bought the two BT telephone boxes on John St and at the Harbour with a view to continuing their communications function though in different forms. Communications between humans takes many forms – telephone, flags, fires, semaphore, Morse Code, letters, emails, social media, facial expressions, speech, hand and body language, numbers, to name but a few.

To illustrate, the location of the Cellardyke telephone boxes can be described as follows

Descriptive – the box at the harbour around the corner from the Haven Pub.

What is interesting about these descriptions is that they all relate to the same place, a bit like Cellardyke – a small town in the East Neuk, a string development along the sea, historic fishing and seafaring village, a lovely place to spend a holiday by the sea.

The telephone box was vital to the wellbeing of the community. It was sometimes a lifeline to the rescue services, be they fire, police, ambulance or coast guard. A means of communicating with all those adventurous Cellardyke folk who had left. A way to make appointments if a letter took too long. The box was an information source, it had an address book in it, access to an operator who could help. It was shared by everyone locally – if it was ringing then someone walking by would answer. People knew what was going on if someone used the phone box. The box was also a marker, a meeting point.

Most of these uses are now gone, but what we are aiming to do is to replace these uses by imaginative alternative ways of communicating.