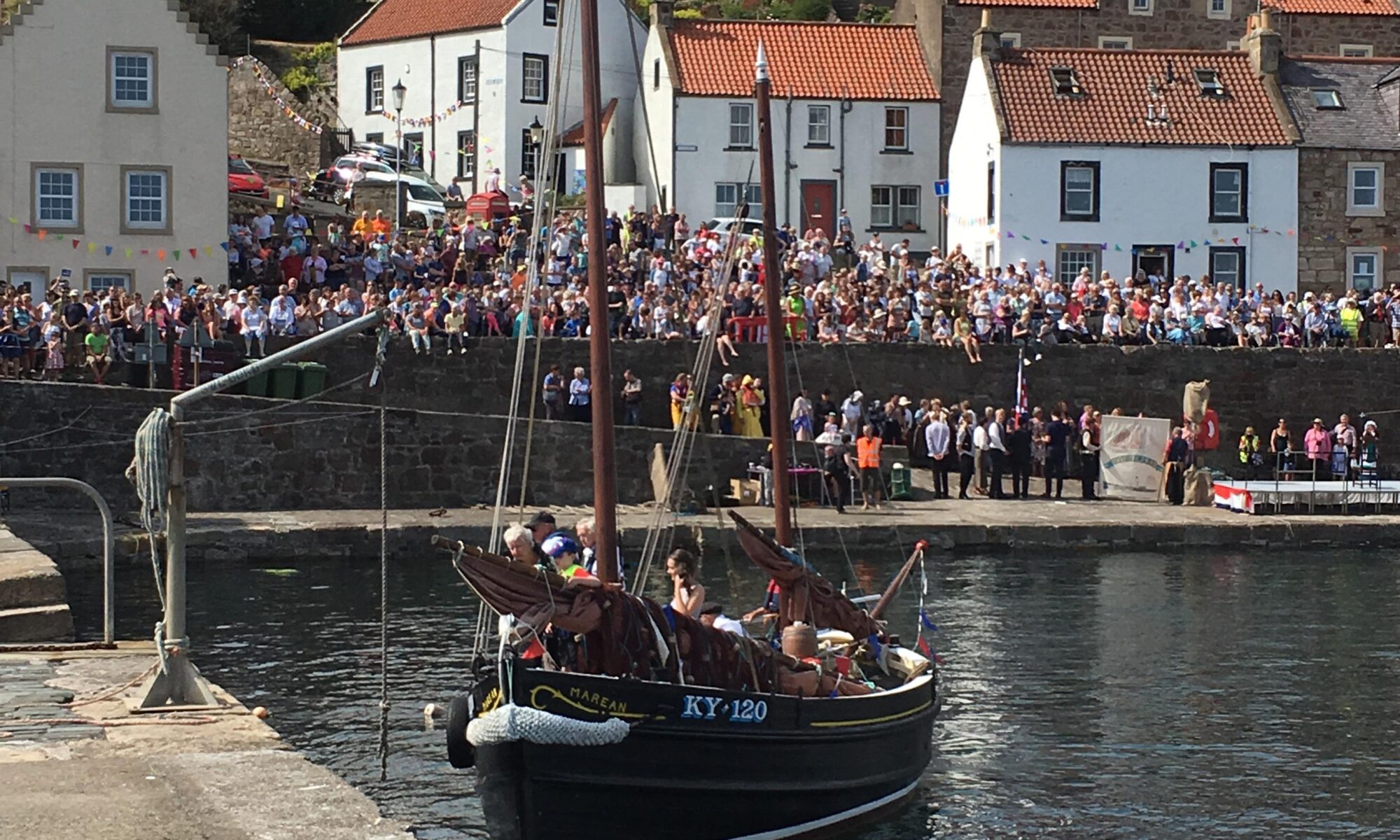 Originally set up by the Cellardyke Improvements Association, the Sea Queen day was to raise the profile of the town and celebrate our links with the sea. Proud Dykers saw that the town was in decline and being overshadowed by Anstruther. Cellardyke was one of the largest and most successful fishing communities in Scotland in the 19th c. The population was more than twice that of Anstruther with over 170 first class fishing boats, 5 oilskin factories, 2 net factories and over 70 other businesses. Cellardyke was a powerhouse of the fishing industry. Anstruther Union Harbour would not have existed without the fishing fleet from Cellardyke.

Without the Cellardyke fish trade the railway would probably never have come to this part of Fife. Renowned mariners, Cellardyke fishermen were also in demand to crew whaling and merchant ships consequently this made them prime targets for the dreaded press gang. Cellardyke provided first class seamen vital to our country during the World Wars . The community crowning of a Sea Queen proved to be as a great way to celebrate the proud maritime heritage.

The coronation of the first Cellardyke Sea Queen, Margaret Donaldson, was in 1948. These celebrations and the crowning of a further forty two Queens took place over the following years. Hazel Ednie being the final one in 1990. At that point it was decided by the organisers that the event in it’s current form had run it’s course.

No more Sea Queen events were subsequently held until the year 2000. To celebrate the millenium Dana Meldrum was crowned what was believed to be the final Cellardyke Sea Queen.

In 2016 two former Sea Queens, one former Sea Queen Herald and one former organiser got together. Individually each of them had thought a revival of the event could be welcomed, the reason being that many people still held great family memories of the original day. The Sea Queen was regarded as a positive symbol of our community to bring back and develop.

After several meetings, Johnny Brown, Elizabeth Dickson, Morag Findlay and Richard Wemyss came up with the new event. The new festival would base itself on much of the the original day however the new focus would be on significantly more community participation.

It was essential that the organising group (not a committee!) came under the umbrella of an organisation to be able to raise funds, fulfil council and health and safety requirements. The Cellardyke Resident’s Association was the most appropriate at the time and we thank the office bearers in 2017 for taking us on. However times move on and a Charitable organisation was more appropriate for many reasons, and so with other members of the community we formed a working group to to investigate and develop what has now become the Cellardyke Trust. Our ambition to strenghen and grow our community is behind everything we do and three of this group are amongst the first seven of the Cellardyke Trust Trustees.

The Ethos of the new Sea Queen festival

It was a perfect day. Over 30 living history characters circulated through the town recounting their exciting stories to whoever they met. A fisher lassie choir entertained people as they passed. A fleet of 5 historic fishing boats took part. The St Ayle Rowing club provided three crews and rowed the Bishop of St Andrews into Cellardyke Harbour. Kilrenny, Cellardyke and Anstruther churches participated. Citizens represented each of the armed services, and took the character of specific Dykers who lost their lives WW1. They bore a wreath along the procession route. Our Sea queen later placed the wreath in the sea to remeber all those lost . The sun shone down on Katie Morris and her attendants.

For the first time in the event’s history, Cellardyke Church held a Kirking service. The congregation came together with the Sea Queen to celebrate the event and community. All the former Sea Queens received invites and one had travelled as far as from the USA to attend the weekend.

Another great day, the weather was very kind to us. One of the themes was local Saints. the St Ayle Skiff, St Baldred from North Berwick rowed into Pittenweem harbour and handed over a pilgrim token to a large puppet of the Pittenweem saint, St Fillan. Three monks bore St Fillan on their shoulders following the pilgrim route to Anstruther by road. The Pittenweem Skiff bore the wreath to the Fruitful and with the St Baldred and Fruitful all three boats headed for Anstruther harbour. At Anstruther, St Fillan handed over his pilgrim token to St Ayle and the full prcession headed to Cellardyke harbour lead by the City of St Andrews pipe band. Ellie Deas our Sea Queen elect and the fleet of historic boats left for Cellardyke by sea.

Ellie sailed into Cellardyke harbour on the Fruitful KY 40. Undoubtedly a very special family day for Ellie. The Fruitful had been built for her great uncle in 1955 and in addition to this, to top it all, skippering it on the day, her 93 year old grandfather Coull.

50 Citizens fired biodegrable confetti cannon as a salute to our new Sea Queen and to mark the 50th Aniversary of the Scottish Fisheries Museum.

After the crowing the Fruitful with Ellie onboard sailed east to the pond (the Cellardyke bathing pool). Joining the skiffs and historic fleet were eight modern fishing boats and the lifeboat.

After Ellie layed the wreath at sea, the fleet sailed round a buoy and on a given signal placed simple model sailing vessels in the water. Local community organisations had built the boats. Each of the primary schools decorated a sail to remember people still living and working on the sea. Fishermen, Oil workers, yachts people, Royal Navy and merchant navy personel, leisure users, lifeboat and boatbuilders. Sitting nestled in the boats were messages in bottles from young people of the area. The fleet was an amazing sight from land and rounded off the day well. In the evening a family celidh rounded the day off.

As in the previous year Sunday began with the Kirking followed by the care home visit. Later in the afternoon the St Ayles Rowing Club Community Challenge rounded off an exciting weekend. Eight local businesses and organisations entered novice teams for an exciting chase course round Anstruther outer harbour. Although it began to spit with rain by the end of the afternoon, this did not spoil a great weekend.