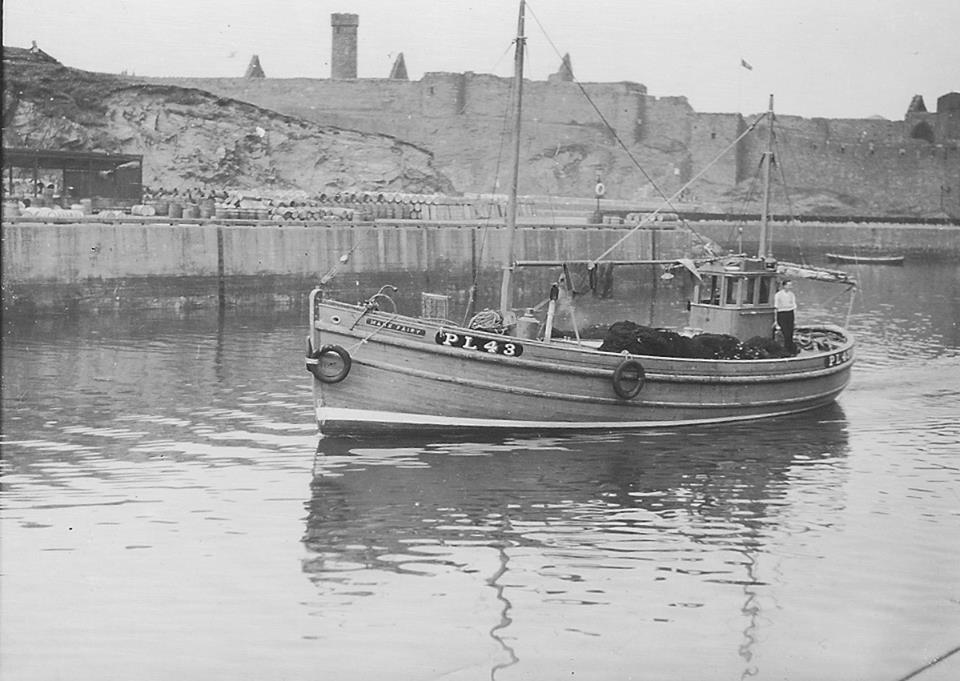 Johnny Deas’ grandfather, John,  was the first of the family to go to the fishing. Born in 1835, he had served his time as a cobbler in Kingsbarns. He moved to Cellardyke at the height of the growth of the herring fishing industry. Both his sons James  and John became skippers.

James after crewing for Jimmy Brunton on the Jessies, bought a 68ft Fifie called the Thistle, KY 372. In 1904 he lost two of his sons just out of the mouth of Anstruther harbour. The mizzen sail struck John, the youngest, knocking him overboard and his brother, Alexander jumped in to save him. Tragically both disappeared from sight below the waves. James had to be held back by the crew from going in after his boys. By the time the sails were dropped and the boat turned around both boys had gone and only one body was ever recovered. On receiving the news James’ wife was heard screaming for her boys along the streets of Cellardyke

John like his brother also bought and skippered a Fifie. Built in Peterhead he named his 68ft vessel Fruitful KY373. In the early 1920’s he replaced the boat with a new motor yawl about 35ft, the Fruitful II KY57. This boat, when under a year old, unfortunately burnt out in Anstruther Harbour. When turning the boat an acetylene lamp fell over setting the engine room alight. In order to prevent other vessels from catching fire the burning Fruitful had to be towed out of Anstruther harbour. Although fully insured, the financial depression in the country started to affect everyone. The fishing suffered quite badly in the late 20’s. John replaced the new Fruitful II with a much older clinker yawl the Comely ML 360. He skippered her until his death in 1946

Third generation fisherman John Deas was known as ‘Johnny’ in the IOM. To prevent confusion with other members of his family also called John, the Skipper of the Manx Fairy is referred to as Johhny on this page.

Johnny was born approximately 1893 in Cellardyke and went to the fishing as expected. He would have sailed on his father’s Fifie, the Fruitful KY 373. At the outbreak of WW1 he was called up and served in the Royal Navy before returning to the fishing.

As his father was only working an old yawl, the Comely, there was more money to be made in crewing some of the bigger drifters.

The late 1920s and early 1930s were hard times for the East Neuk fishermen. In 1926 Cellardyke owned thirty nine steam drifters. These were large coal fired boats expensive to run, having to employ engineers and firemen as well as the fishermen. With the rise in coal prices in the late 1920s and the great depression in the early 1930’s, Johnny who may have been expected to own his own vessel in better financial times remained a crew member of others boats.

When he was offered the chance of a job aboard the Manx Fairy working out of Peel, this seemed a good chance to earn a steady wage in a modern fishing vessel along with some other young East Neuk men.

It must have been quite a decision to leave his wife and young family to move to Peel. His wife Nellie Coull (from the Moray Firth) would look after the family at home and then move to Peel over the school summer holidays. Coull and John, the sons, working passage on the East Neuk fishing boats through the Forth Clyde canal, while Nellie and her daughter May took the train then Steamer to Peel.

When the first skipper of the Manx Fairy left the Island there was no question about Johnny taking over as skipper. He was appointed immediately and did very well. As these were company boats, Johnny skippered The Fairy mainly but also The Beauty at times.

Since the end of the herring season at Peel the four boats owned by the Isle of Man Fisheries have been fishing out of Maryport in Cumberland, and the boats are now home for the holidays. Last week the Manx Fairy (Skipper J Deas) had a record gross earnings for the Cumberland port.

The crew of the Manx Fairy wish to thank the Peel Women’s Guild for parcels of comfort which each member has received.

Johnny had served in WW1 but when WW2 broke out he was not still within the conscription age bracket. When the four Manx boats were requisitioned for war work and Johnny lost his job with the Isle of Man Fisheries Company. He returned to Cellardyke where he got work as a night watchman at Walter Reekie’s Boatyard in Anstruther. Wood regularly went missing from the yard for home heating due to the scarcity of fuel. The IOM Company placed orders for four replacement boats from Tyrells of Arklow. Johnny left Anstruther for Ireland to bring one back. He was one of the Companies trusted skippers however he got into trouble with the Customs on that journey back. It was not his fault, unbeknown to Johnny the company directors had several boxes of fine china aboard and Johnny received a fine as a smuggler.

Johnny Deas had returned to the Isle of Man as skipper of the Manx Clover. He fished a few more successful years however due to ill health he returned to Cellardyke in 1946. He died 26th Feb 1948 from muscular dystrophy aged only 55. The family description of his illness was that he had ’gone off his legs’.

The death has taken place at Cellardyke, in Fifeshire, Scotland of Mr John Deas, who was for a number of years a skipper at Peel, in vessels owned by the Isle of Man Fisheries Ltd. Johnny Deas was a most poular man on Peel quay, he coming to Peel when the boats were new; at a time when the Peel fishing was almost down and out. Two years ago, ill health caused him to give up the sea, and he returned to his home in Fife. He was in the navy in the First World War, and his two sons who were also on boats owned by the Peel Company, served in the navy in the last war.

Johnny’s son John, after his war service crewed several vessels. Latterly he fished the steam drifter Noontide KY 163 owned and skippered by Jimmy Brunton. This Skipper Brunton was grandson of the skipper of the Jessies. Due to ill health Jimmy gave up the fishing in 1953. John’s up and coming marriage to Lydia made him decide to work closer to home, no longer on the big boats. He ordered a 30ft vessel from Jas N Miller & sons Ltd of St Monans in 1955. He named it the Fruitful KY 40 after his grandfather’s boats.

John replaced the vessel in 1960 with a 40 footer also from Millers, the Fruitful II KY237. Coull, his brother left his berth on the Boy Peter and joined him. They worked the Fruitful II with crewman Watson Bowman until John’s early death.

John’s son John also went to the fishing and latterly had his own vessel, the fibreglass Fruitfull KY40, he has now left the sea.

Johnny’s second son Coull, at 95 years old (2020) still volunteers for the Scottsih Fisheries Museum. Coull visited the Isle of Man when his father was skippering the Manx Fairy. He worked trips with all the “Manx” Boats during his school summer holidays. Coull still claims the Cellardyke boats were better sea boats.. Sometimes they went to the clams and made extremely good money.

Coull was called up from the Isle of Man for Naval service on reaching conscription age in WW2. He was away from home for four years. After the war he worked on a few more boats including the Refleurir KY 16. This was the last ever fishing boat built in Cellardyke in 1938. Coull then worked with skipper Peter Murray on his Boy Peters before joining his brother John on the Fruitful II in 1960.

Coull’s sons, William and Robert  were both crew on whitefish and prawn boats. Now (2020)  they work for oil, supply and marine support companies.