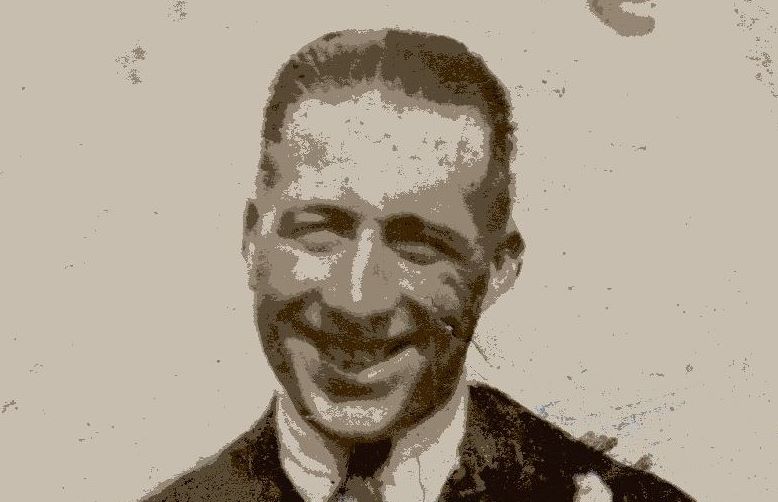 Lockhart Horsburgh was born 10th March 1913 at Still Park, Pittenweem. His father, Andrew Horsburgh (a fisherman),and his mother Annie Horsburgh nee Lamont had been married in Peterhead on 12th January 1907. Sadly Annie Lamont died in 1919 when Lockie was ony 6. His father died 1949 in Cupar.

Subsequently Lockie’s grandmother, Catherine Bowman, who was about 72 at the time, brought Lockie up. She had become responsible for this lively young boy, as it was said Lockie was a bit of a handful. Catherine died approximately 8 years later.

Lockie had started work on the boats at a young age, no doubt as cook and coiler on the driftnet boats like so many 12-14 year olds before him.

He was 19 years old and working with the KY fishing fleet at Peel when he met Esme Quayne. It was said the Peel men were jealous of the attention the Scots fishermen were given by the Peel lassies. At the end of the herring season the KY boats returned to Fife, however on reaching home Lockie turned round and went straight back to the Isle of Man. On 12th September 1934 Lockhart Horsburgh married Esme Jane Veronica Quane by special licence in St Gerorges Church, Douglas, Isle of Man.  (Esme’s father was Joseph Evan Quane). Esme had been brought up in Birkenhead. Like Lockie her mother had died young. Esme was sent to live with a relation on the Isle of Man and grew up there.

We don’t know how or why the East Neuk men were given the opportunity to crew the new Manx boats. Lockie was young at 24 to be appointed skipper. However his connections and knowledge of the Manx fishery would have stood him in good stead. As an avid reader of books, serious subjects his family tell us, not novels, Lockie was a well educated man.

Lockie became the first skipper of the Manx Beauty and took her along with his crew partnered with sister ship the Manx Fairy, through the Forth Clyde Canal shortly after their launch on 11th June 1937 for their naming ceremony on the 15th.

The Declaraltion of War on 3rd September 1939 changed the world. Driven by duty the same day Lockie headed straight to the recruiting office in Peel to sign up for the Navy. However as it was a Sunday and the office was closed he could not complete his mission. He returned on the following day, being first in the queue he was able to sign up. He said that had he not signed up he would never be able to face his crew again.

His Naval training was in Lowestoft.

Lockie served Minesweeping on the North atlantic and was aboard HMS Berkshire.

Lockie was hospitalised twice. Once for an operation on his throat. He returned to the Hospital in Douglas for the operation. The second time he had broken his ankle whilst on service thought to be near Reykjavik.

Lockie knew that the Isle of Man Fisheries Company had promised him a job on his return and his command was the Manx Rose. One of the Irish buit vessels.

Lockie Horsburgh, John Deas and their IoM crews were all driftnet men. In the first years they did attempt the ring net but did not perfect the technique. They hated the ring net as they beleived that it was not good for conservation. There are however reports of them partaking in this fishery.

Two ring net boats owned by the Isle of man Fisheries Ltd have completed a six week’s season of fishing at Loch Boisdale in the Island of South Uist, running the herring across to Mallaig. It has been an excellent adventure for these young Peel men who have experienced ring net fishermen from Campbel town ( Argyllshire) on board with them.The two vessels, the Manx Lily ad Manx Rose earned £120 per man for the six weeks, an average of £20 per week. They were in charge of Frank Gallacher and Lockie Horsburgh, and will now join the Clyde ring net fleer to fish the Clyde.

It is expected other boats with local crews will soon follow this lead and that soon the island will once again take it’s proud place in fishing circles.

Reg Bimson, a businessman on the IOM had bought a vessel called the Signora as an investment and was in search of a skipper for her. On asking around Lockie’s name was the one mentioned over and over again. Reg offered Lockie the position. Lockie was to get 1 and ¼ shares the standard Skipper’s share. This was early 1950’s. They reregisterd the Signora PL15, changing it from the original Douglas registration.

In the early 1960s there were Government grants and cheap loans. Lockie and Reg decided to build a new Signora II at Miller’s of St Monans. The family took the long journey to St Monans for the launch in February 1962, the plan was for Ruth, youngest daughter, to name the boat. However for some unknown reason there was no ceremony and they left again disappointed. The vessel originally held the rgistration KY215 to ensure UK subsidy was available to fish for herring. However when the Manx Government saw the newest boat refusing to carry the local registration they changed the subsidy rules and the Signora II became PL27.

Lockie worked both boats for a while with two crews but decided to sell the original Signora. The new owners bought her as a yacht conversion project.

All through his fishing career he fished herring in the Summer and scallops in the winter. For many years visiting Whitby for the herring season, stopping off at Pittenweem in both direction from home.

Lockie was a very popular in the Island and a good skipper, some people thought that his name was “Lucky” as Lockie was such an unusual name.

Lockie sold the Signora II round about 1976 without any particular plan for his retirement. The chance of a job skippering a small boat came up, the Brigee. Working, in Douglas Bay, for the harbour board. This was a perfect position for him, Lockie would collect harbour dues and rescue rowers and any other necessary job round the harbour. He eventually retired at the age of 70 about 1983. Lockhart Horsburgh passed away in 1986. The most successful Isle of Man herring skipper of the 20th century.