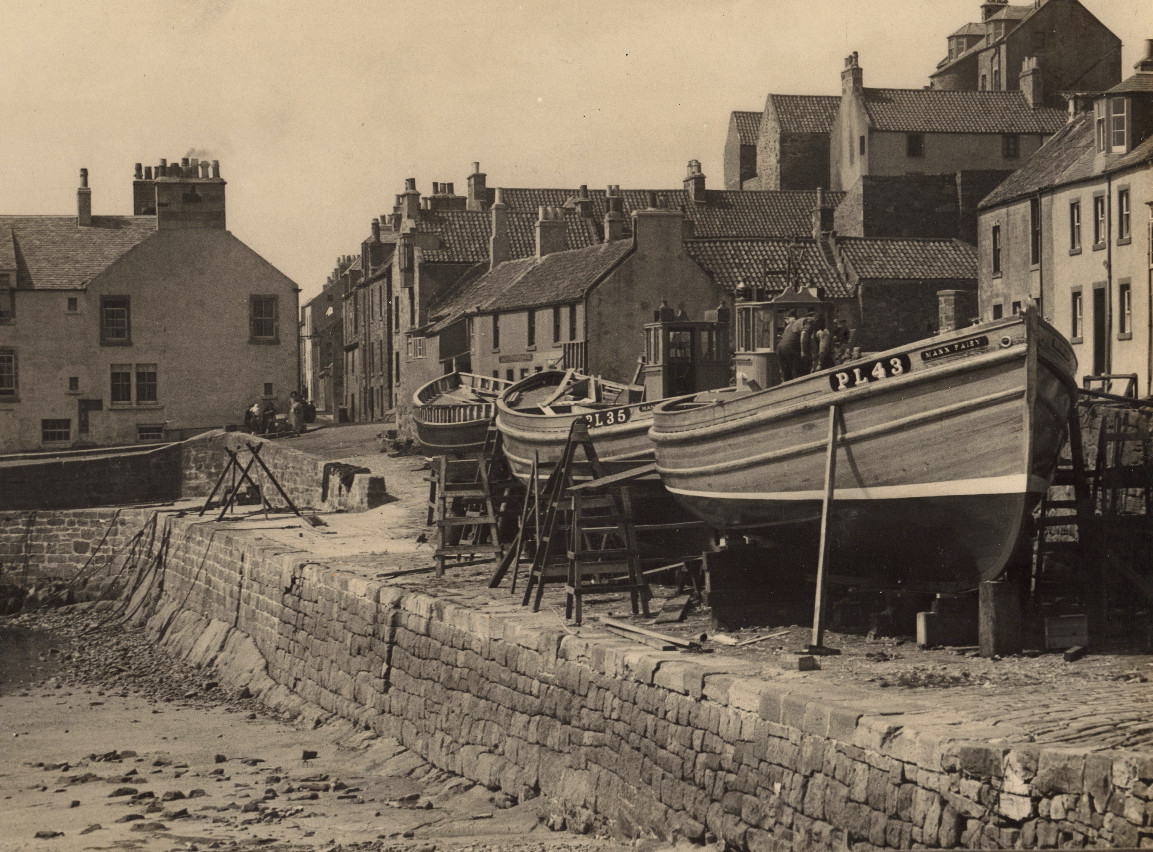 The Building of the Manx Beauty and Manx Fairy

Provost Carstairs’ yard was the ideal progressive yard to come to for the commissioning of the Manx boats.

There is very little written about the building of the Manx Beauty and Manx Fairy.  Provost Carstairs may have designed the boats himself, but there is no evidence to corroborate this. The sterns of the vessels are cruiser sterns based on the Gleanaway and Royal Sovereign design. The sharper canoe sterns of the standard ring netters were the trade mark of yards like Wm Weatherhead’s, Walter Reekie’s and the early Jas. N Miller’s ring net boats. As a result of this innovation in stern design it made the boats good sea boats. Consequently skippers and crews who have sailed in them all state the extremely good sea going qualities of these boats.

The third boat seen on the Bulwark is a Pilot Cutter. Her launch was a month after the Manx Beauty and Manx Fairy. Tees Pilot Cutters Co Ltd, Middlesbrough commissioned this vessel. Her name was “W.R Lister”

Surprisingly for the 1930’s there are many good photographs which we believe the majority are George M Cowie’s.

Coull Deas son of Skipper John Deas remembers that Sandy Mayes was the Foreman. Sandy was a Dyker, however most of the yard workers were St Monans men. As far as Coull remembers no carpenters relocated from Sandhaven. Another worker was Dave Peebles. Many of the St Monans workers cycled to Cellardyke to their work.

Not the ideal modern yard

There was no drawing office, the steam box was in a yard further east where a garage and bungalow now stands. Consequently the men had to carry the hot planks 50 yards to the boats on the bullwark. There was very little room either side of the vessels, a high wall stood to one side and in addition to that the edge of the harbour made working there a precarious buisiness.

A revival in boat-building has been made at Cellardyke, where the industry had disappeared for a number of years and the old yard had been turned into a garden. The revival has been staged owing to the enterprise of Provost Carstairs, who is a member of the Fishery Board, and a number of other local men. Within the next fortnight they expect to have completed two boats for the Manx Government. These boats are of unusual interest, for they are the most up-to-date type of ring-net fishing boats, and they have been specially constructed for the Government of the Isle of Man, which is subsidising its home fishing. One will be named Manx Beauty and the other The Manx Fairy.

The boats are of an entirely new type, the graceful lines of which have been admired by the fishing community. They can be run at half the cost of the steam drifter, a type of craft that the ring-net boats generally are replacing. The Cellardyke boat-builders have revived an ancient local craft, for the boats are entirely hand made. Provost Carstairs, who was one of the moving spirits in the revival, has carried out many successful experiments in fishery development in the district.

An old local craft is being revived at the East Fife Fishing Village of Cellardyke, where boatbuilders are busily engaged in meeting orders for boats. The Industry has been dormant for a number of years and the revival is due to the Enterprise of Provost Carstairs, who is a member of the Fishery Board, and a number of other local men. Within the next fortnight two vessels will be completed for the Manx Government which is subsidising its home fishing fleet. The boats are the most up to date type of ring-net boats. They will be named Manx Beauty and Manx Fairy respectively. The boats in the Cellardyke yard, which up till recently was cultivated as a garden, are entirely made by hand.

The Manx Beauty  was the first of the two boats launched

LAUNCH’ OF BOATS IN FIFE Two motor fishing boats which are to form part of a fleet ordered by the Isle of Man Government were launched yesterday from the Cellardyke yard of the East Fife Boat Building Company. The boats are to be officially named Manx Beauty and Manx Fairy by the Governor of the Isle of Man on Tuesday at Peel Harbour, where they are to be taken by East Fife crews, but as they left the slipways yesterday bottles of wine were broken over their bows by Miss Smith, and Miss Boyter, two Cellardyke women.

The boats were launched broadside on and there was some excitement among the large crowd when the second one struck the water and partly heeled over. Bailie James Bett was flung over the side, but he grasped the rope and hauled himself on board.

The second of the boats launched was the Manx Fairy

Mr. P.J. Moore, represented The Manx Government at the launch of the Manx Beauty and Manx Fairy. He said “The boats launched are of the very latest type, and are equipped for both ring-net herring fishing and seine-net white fishing. They will be able to operate all the year round and to carry on fishing at other ports besides those of the Isle of Man. They are cheap to run”.

The description in Provost Carstairs’ obituary was that he owned “one of the finest collections of fishing vessel models in Scotland” . The Scottish Fisheries Museum, in Anstruther houses his model of the Manx Beauty, below.

After the Launch – The Naming Ceremony

The launch ceremony was Friday 11th June 1937. Positioning of the masts, final fit out and all other checks did not take long. Soon after that the vessels and crews left the East Neuk for the Isle of Man .

Pittenweemer Charles Hughes was first skipper of the Manx Fairy. However it was John Deas from Cellardyke who was navigator for the journey and through the Forth Clyde Canal. He soon after became skipper.

The skipper of the Manx Beauty was Lock Horsburgh ex Pittenweemer who had married in the Isle of Man in 1934.

The naming ceremony was only a few days after the launch, Tuesday 15th June. Following their amazingly quick fit out and sea trials the Cellardyke boats berthed alongside their Sandhaven built sister ships Manx Lad and Manx Lass.

The Sandhaven builds were ready before the Manx Beauty and Fairy. Unlike the Cellardyke boats it was Isle of Man crews who collected these vessels prior to the naming ceremony. It is unknown why East Neuk crews took up employment with these boats but no Broch fishermen. This may also have been Provost Cartsairs’ influence.