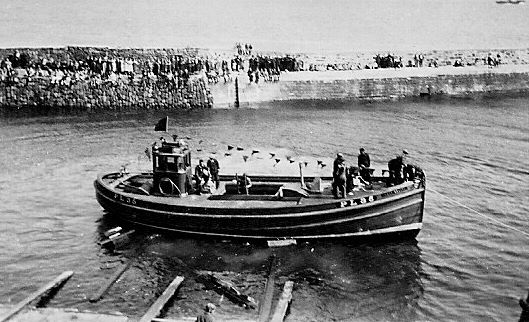 These state of the art boats were core to a Manx Government initiative to revive their herring fishing industry. The plan was to create opportunities for young Manxmen to gain employment a fishing industry thriving off their coast but declining on the island.

A crowd of almost 2000 turned out to watch the launch of the Manx Beauty PL 35 and Manx Fairy PL 43 on the 11th June 1937. Two further boats, the Manx Lad and Manx Lass were ordered and built in Sandhaven near Fraserburgh

The East Neuk connection did not stop with the launch. The Manx Beauty’s first skipper was Lockhart Horsburgh from Pittenweem and John Deas of Cellardyke became skipper of the Manx Fairy. These fishermen would help local crews gain experience and hopefully regular decent wages encouraging young men back to the industry.

The Admiralty requisitioned the boats into service during WW2. After the war the Manx Beauty successfully returned to fish from the Isle of Man until eventually being sold. For the last 50 years the Manx Beauty has been in the ownership of the Maddocks, a fishing family of Birkenhead. Arthur Jnr decided to retire a couple of years ago and the boat came up for sale.

The Manx Beauty a boat of local importance.

The Manx Beauty is iconic, her build photos are fondly displayed in many houses in the town. She is a symbol of the end of an incredible period of growth in the town of Cellardyke. This boat represents a pride in our fishing community, supports businesses and not forgetting the hardship. Cellardyke suffered more than its fair share of losses to the sea with the community suffering multiple tragedies.

A thriving innovative boatbuilding industry developed in Cellardyke in the 19th C, with over a hundred boats being built there. The Manx Beauty is one of the last Cellardyke built boats in existence. Only one year after her launch in 1938 the last yard closed down.

The Manx Beauty is one of the last surviving 1930’s built ring netters. Hundreds of varnished ring net vessels built and worked the herring ports.

As a WW2 veteran she holds a particular place in the story of this country’s war efforts. see Manx Beauty – Detailed history

In the summer of 2019 a community group formed to look at the potential of saving and restoring the Manx Beauty. After two trips to see the vessel, “Bring back the Beauty” campaign launched with the purpose of returning the vessel to the East Neuk and to restore her for community use.

The group have many and varied skills including experience in multiple boat restorations. We are under no illusions that this will be a major rebuild project to bring the boat back to her former beauty.

The Vision of the project

Our Vision is to inspire intergenerational skill sharing and community ownership . We wish to motivate individuals and organisations to share in the process of bringing this vessel back to life. When restoration is complete The Manx Beauty will take part in multiple events and projects and in her new role she will represent our modern community rooted in a unique maritime history.