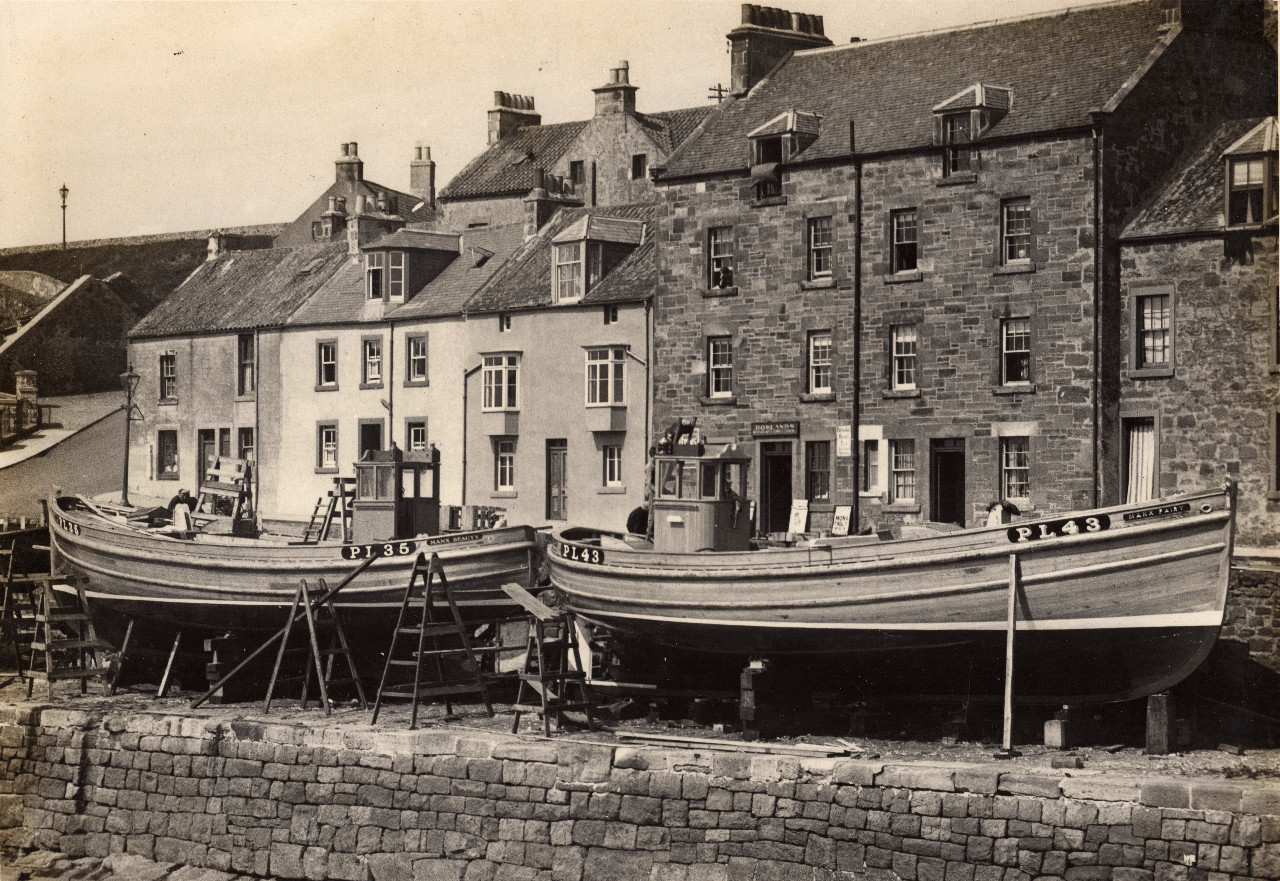 In 1936 The Isle of Man Government placed an order with the East Fife Boatbuilding Co, Cellardyke for two fishing vessels. These were the Manx Beauty and the Manx Fairy. Similar orders went to J & G Forbes of Sandhaven for sister ships the Manx Lad and Manx Lass .

The launches of the Manx Beauty PL 35 and Manx Fairy PL 43 took place on the 11th June 1937. The four vessels were part of a Manx Government initiative to revive the Isle of Man fishing industry.

By subsidising a fleet of state of the art ring netters the Manx Government hoped to encourage young Manxmen back to the fishing. The Isle of Man’s large sailing fishing fleet rapidly declined into the 20th century and expensive steam powered fishing vessels did not attract investment. By the 1930s comparitively few young men on the Island saw prospects in the fishing trade. At the same time ring net fleets belonging the West Coast of Scotland and Ireland were working their waters very successfully.

Businessmen in Peel suggested setting up a company to reverse this decline. They sent a letter to the Isle of Man newspapers in December 1930 asking for support. It took until January 1937, when they were able to raise capital to build four vessels.

Why  did the Manx Government come to a comparitively unknown yard in Cellardyke for these boats and not go to Weatherheads Cockenzie,  Walter Reekies or Jas N Millers of St Monans? These yards had established reputations for building quality ring netters.

The Manx Government decision to invest in these vessels was to encourage their young men by giving the highest possible return against running costs and here is where we introduce Provost William  Carstairs of Anstruther.

Willie Carstairs was son of a Cellardyke fisherman who had not followed his father to the sea but studied business and by the 1930s owned one of Cellardyke’s most sucessful Oilskin Factories, John Martin and Co. he was also a member of the Fishery Board for Scotland.

Carstairs was a visionary who saw the demise of the steam drifter with its rising build costs and even greater running costs. He saw his share fishermen and Cellardyke community like many of Scotland’s fishing communities suffering in the economic depressed years at the end of the 1920’s and early 1930s.

He was also a man who put his money where his mouth was and in 1928 commissioned two 53ft super bauldies (motor drifter/ liners),  the Winaway KY279 from Alexander Aitken ( Aitken’s Anstruther yard stood where the Scottish Fisheries museum boat yard now operates from) and the Onaway from Walter Reekie boatbuilder of St Monans who opened his second yard next to the Lifeboat shed in Anstruther to build this boat. There was only a fortnight between their launches that November. Multiple newspaper articles expounded their efficiency. With semi diesel engines and their relatively low running costs they were seen as a step forward in fishing vessel design.

The Onaway and Winaway were very sucessful however these were motor vessels whose hulls varied little from the obsolete fifie sailing vessel with an almost vertical stem and stern post. They were ideal for some fisheries but at 53ft it was soon seen that they could not operate safely and compete with the 90ft steam drifters. This was all the more obvious in the important herring fishery in the winter seas off Yarmouth and Lowestoft.

And so we come to a major milestone in the history of Scottish fishing boat design, in 1930 Willie Carstairs comissioned the Gleanaway KY 40 to replace the Winaway. She was the first cruiser sterned motor drifter, a 75ft wooden boat design not tweaked from the sailing fishing vessel design but specifically to his order developed as a motor boat. The Gleanaway was the mother of the Scottish and UK Fishing fleet. Her basic premise of hull design was prevalent in Scotland until the big transom sterned vessels were sucessfully developed.

J & G Forbes of Sandhaven cost to build was about £2800 this was approximately half the cost of a wooden steam drifter. The Gleanaway’s engine was larger and more powerful than Carstairs stated would be optimum size for economic efficiency. However her running costs were still only 1/3rd that of a steam drifter providing the fishermen with a much better share of profit after costs.

Mr Adamson Secretary of State for Scotland christened the Gleanaway.

Six years later, Provost Carstairs designed the replacement for the Gleanway. With his usual consideration for the local commmunity, and with a thought for local employment he did not return to Sandhaven for the boat to be built. Willie Carstairs brought one of the Forbes family, George, to set up a a boatbuilder’s yard in his beloved Cellardyke.

The East Fife Boatbuilding Company took over a redundant boatyard in Cellardyke. It was just east of the harbour. Instead of building the boats in that yard and then dragging them to harbour for launch as the sailing fifies had been in the past, the Royal Sovereign’s ( the Gleanaway’s replacement) construction took place on the harbourside known as the “bullwark”. The preparation work such as plank cutting and steaming was carried out in the old yard. Cellardyke Harbour is tiny. The 75ft Motor drifter was an impressive site when launched sideways on to an audience of 3000.

Mr J. Henderson Stewart, M.P. for East Fife, and Mr George Hogarth, chairman of the Fishery Board for Scotland, were on board the Royal Sovereign for her sea trials. She was described as ”a boat which may do much to revolutionise the industry” . She was fitted with the next generation engine and included multiple safety improvements including being one of the first boats where the crew were able to travel from the accommodation to the wheelhouse/ galley without going on deck. At the launch Provost Carstairs’ quote about the efficiency of the Gleanaway which Royal Sovereign was expected to better was:-  “Last season the steam drifter Breadwinner had a £445 crop, and the crew’s share was £16 a-piece. The Diesel oil-engine drifter Gleanaway had £438 crop, yet the share was £33 5s each”

These four boats were multi purpose – ring net boats that could drift net, scallop trawl and seine net.  The Isle of Man Fisheries Limited saw the potential of successful ring netting. The company skippers were in charge of the fishing techniques they employed. Each of them making their own judgements as to which method of catching herring would be most sucessful.

Lock Horsburgh, John Deas and their IoM crews were all driftnet men. In the first years they did attempt the ring net but did not perfect the technique. Invariably they reverted to their tried and tested method of catching, the drift net. This was to the dismay of the Company who believed the ring net to be the most lucrative catching method. The company saw that some of the most sucessful ring netters of the time would regularly land in Peel. That was the bar that they were setting performance against.

Johnny Deas’s brother-in-laws George and Peter Coull, orginally hailing from Port Gordon on the Moray Firth, had relocated to Girvan. They crewed for the McCrindles who operated the sucessful ringnetters Alipeds. Johnny used the Coulls to teach him the ring net. However he preferred the drift net when at herring, and he was highly sucessful at it. One of the biggest catches of herring landed at Girvan was Johnny Deas’s Manx Fairy.

It was after the War when Lock Horsburgh became more proficient at the ring net and worked it more frequently.

The Manx Beauty, Manx Fairy, Manx Lass and Manx Lad were all requisitioned. As small fishing vessels their employment was as Examination Service Vessels. Too small for submarine nett work or convoy patrol they inspected all vessels entering and exiting the port.

The Manx Beauty had a machine gun placed on her foc’sle. Supporting brackets are still visible under the deck beams and rows of bolts down her fore quarters.

Three boats the Manx Beauty, Manx Lad and Manx Lass were based in Workington.

On August 16th, 1940 The Manx Lad was struck by a mine off Holyhead and lost.

During 1940 The Manx Fairy was based at Holyhead as an Examination Service Vessel.